Pumps for Free to Lighthouse Shipholding AS

Pumps For Free can be used for newbuilding or retrofit applications. Together with DESMI, the shipowner determines where an onboard energy saving can be made. The estimated saving is calculated by comparing the energy load of a vessel’s existing or specified (for newbuilds) pumping system, against the reduced expected load of a solution such as OptiSave™ – based on DESMI’s experience with over 300 similar installations.

The estimated fuel savings of the new system are then written into a contract between DESMI and the shipowner, under which equipment can be installed and commissioned without any money changing hands.As savings are realized, the shipowner begins to pay for the new system with the money saved – usually over a 14 to 18 month period. 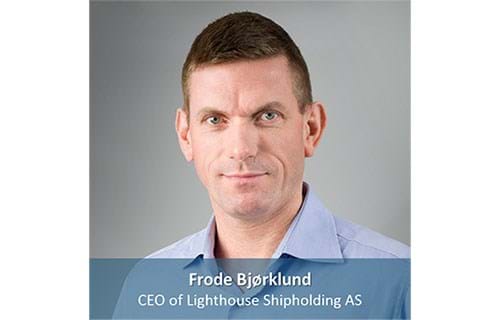 The case of Lighthouse Shipping
“I joined the company in January 2015. The shipbuilding contract for our five new vessels had been inked in 2013, and OptiSave™ wasn’t in the Scope of Supply. Fleet Management in Hong Kong were doing the supervision for us and for Spar Shipping, and they mentioned the solution to us as one of three alternatives for improving the vessels’ spec beyond the original agreement.”

As a newly started CEO, Frode Bjørklund already had his plate full. After an initial look at the idea, he lacked sufficient time to take things further, and the proposal languished on his desk. “It was a very busy period, but when I did get a moment, I visited the DESMI website, spoke with the company, and decided the Pumps For Free concept looked very interesting indeed.”

No-brainer
By then, Fleet Management had performed early tests of OptiSave™ on one of the Spar Shipping vessels and made a more solid recommendation to Lighthouse Shipholding. “Like any financially driven shipowning company, we needed a strong business case with a horizon well within the lifespan of the vessel. Pumps For Free seemed to be a very compelling case, so we started talking to DESMI about payback time, looked at oil price trends, and worked out the likely ROI for our vessels. In general, the financing aspect of the deal – its cash neutrality – got our investors on board and we decided to include OptiSave™ on the four vessels remaining to be built. For the first vessel we will consider a retrofit as it is only marginally more expensive. In fact, going for the concept was almost a ‘no-brainer’!”

No corners cut
Frode Bjørklund is highly positive about his experience with both DESMI and OptiSave™. “We met with DESMI in Shanghai at the yard and have been working closely both in Scandinavia and at the local level. I’ve found the company to be open-minded and easy to talk to. And they have good shipowner customers on their reference list, too, including one widely considered to be the industry’s technology leader.”

“DESMI has cut no corners on building a great system. Even though we have been running the vessels mostly in warmer water temperatures, which means we would have expected lower savings, it has still delivered according to schedule. And in a trans-Atlantic scenario, we would see even more savings.”

You must accept cookies to view this.
RELATED PRODUCTS

OptiSave for sea and freshwater pumps onboard "Johann Jacob"

DESMI is a global company

Find address and contact information of our global locations